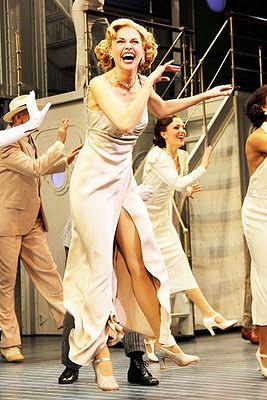 Despite popular belief, there are a lot of ‘happy’ people in the world. From yoga-lovers to rock-climbers, foodies to bloggers (no pun intended), happiness is on the rise, and that makes me smile! (Pun definitely intended.) This of course, however, is from personal observation and not a definite fact, my main source of evidence streaming directly from my morning Pinterest feed. What I DO know however, to be 100% true and can offer 23 years of proof in justification is that there is one group of people in this world who are exceptionally happy—leaps and octaves above the rest. If you’re a musical theatre person, you’re probably already smiling reading this—and if you’re not; read up on why this endlessly humming species has a perpetual grin before you go and get all annoyed with them.

10. It’s in their blood.
I don’t know if there’s ever been an actual scientific study on said singers and dancers, but think about it: if a person is organically inclined to partake in singing and dancing at the same time, there’s already some happy going on in that soul. That is my hypothesis.

9. They’re caught up in different worlds.
It is SO much easier to forget about that colossal electric bill due on Thursday when you’re pretending to be someone else at rehearsal on Wednesday. What better way to escape the troubles of reality than by not spending too much time in it? Delusional? Maybe. Does it work? Definitely.

8. They believe in happy endings.
Almost EVERY if not every musical has a happy ending, regardless of the bumps and dance-breaks along the way. It’s a lot easier to stay cheesy and have faith in the fairytales when you’re persistently telling similar stories.

7. “Always remember to SMILE.”
Musical theatre people know that this is a basic. No matter what happens during a show, bringing a bright dazzling smile to the audience is key. And don’t they say that the more you smile, the easier it becomes? Well, maybe that’s why it seems so effortless for them.

6. Free entertainment.
Being around other musical theatre humans on a daily basis means that you are 100% likely to meet comedians, dancers, actors, and other variously talented beings. Thusly, going to rehearsal means that you are able to experience said abilities FOR FREE. How could that not make you happy?

5. They understand optimism.
When something bad happens in life, these people don’t waste time wallowing. This is just a plot-twist, and the perfect opportunity for a moving ballad.

4. They don’t spend time bashing what they hate.
If you’re ever in doubt or lacking faith in humanity—go see a musical and wait to meet the actors after the show. Regardless of backgrounds, beliefs, or upbringings, these are the people who will accept anyone for who they are. Life is so much more fun that way, and why waste energy on anything but love?

3. Sometimes you’re the lead, and sometimes you’re the tree.
Regardless of your role, being a part of a musical means being a part of something bigger, and it’s true what they say; there are no small parts! Understanding this concept will undoubtedly help these connoisseurs in the grand scheme of life. If you can remember that it’s not the part you’re given, it’s how well you play it, then well—you’re golden.

2. They know how to be self-reliant.
Even though being in a production means being a team-player, going from project to project means constantly being a part of a new team. These people need to know how to accentuate their strengths and acknowledge their weaknesses in order to keep moving forward. They also need to be comfortable enough with themselves to fall in love over and over again, having faith that they’ll be just fine after the final bow. Imagine that.

1. They don’t know how to hide their passion.
Holding back is simply not allowed in this business. Give it your all, leave it under the lights. It’s impossible to give too much soul. There’s just no way around being your raw, vulnerable, unapologetic self in the world of theatre—and that, is happiness.

A believer in working hard, never giving up on your day dream, always learning new things about the world and self, seeking a relationship with your higher power, the power of good girlfriends, traveling often, reading about what is going on around you, having faith that all experiences will make you better, and loving your grandparents. View all posts by Veronica Taylor